Post 6 of the South East Asian Adventure series. View the rest of the series so far here.

Our three days sailing round Vietnam’s Halong Bay were undoubtedly the most relaxed we spent in Asia. It helped that the setting was spectacular – like nowhere else I’ve ever been. The bay is defined by its innumerable islands, rising out of the sea like rocky icebergs flocked with green, each holding golden beaches, tropical forests and mystical caves. Beneath, above and between these spires there is only dreamy blue, creating an endless, surreal seascape that could ostensibly be Heaven. 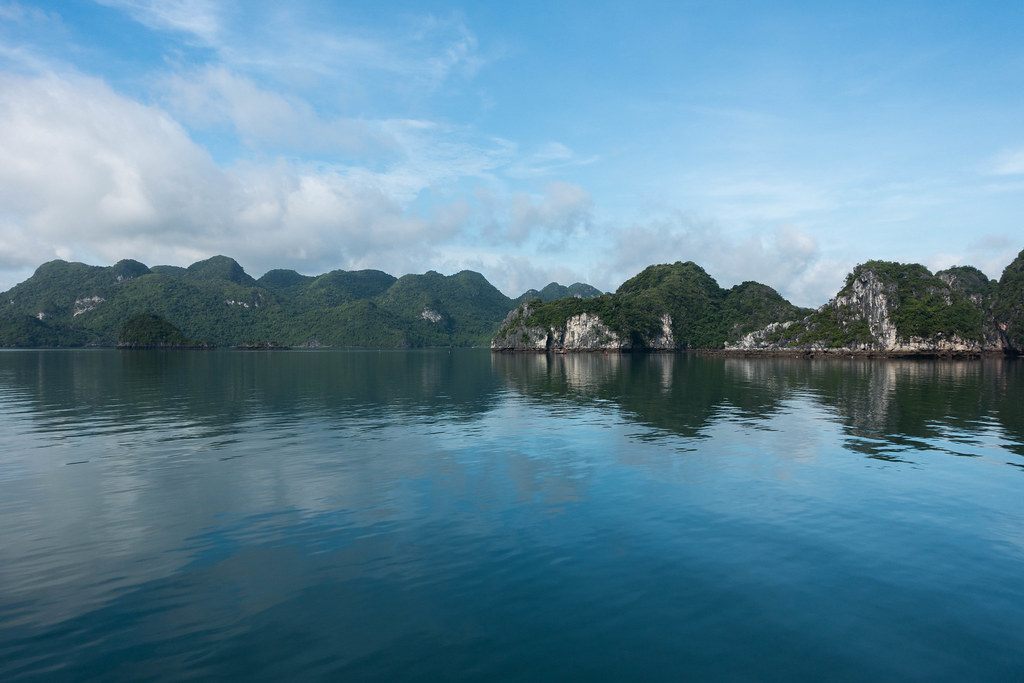 We booked our three-day cruise with Bhaya Cruises based on the glowing TripAdvisor reviews, activity-packed itinerary and reasonable price. The itinerary changed before our trip, causing us to lose the bike ride on Cat Ba Island due to new coastguard restrictions. However, we were also offered (by email, a few days beforehand) a free upgrade to the smaller and more luxurious Bhaya Classic Premium boat.

We weren’t sure about switching to a boat with fewer people, but in the end we were swayed by the prospect of having our own balcony. We would soon find out whether our decision had been the right one… 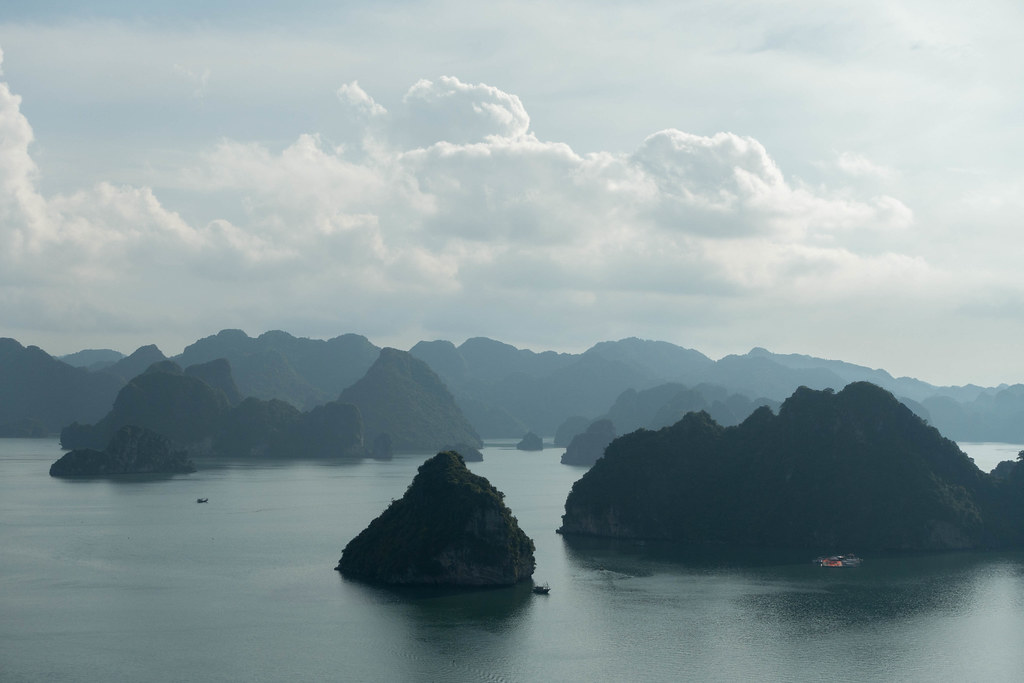 It took four hours to travel from our hotel in Hanoi to Halong Bay harbour. I slept in the minivan for most of that, waking only to wander aimlessly round the strange factory shop at which we stopped on the way.

When we finally boarded our boat we were surprised to see that its small wood-paneled bar and dining room held just two tables, seating four and six. Our cruise manager Mr Linh proceeded to tell us about the boat and the cruise, before asking us to introduce ourselves.

Our party of 10 was small but varied. Besides myself and Steve there was another British couple of around our age called Surih and Naiha, as well as two middle-aged couples from Australia and New Zealand and an older mother and her early-20s daughter from Taiwan. The other couples were easy to talk to and we learned a lot about each other very quickly.

With introductions over we went to our cabin, and I was delighted to see that it was just as pretty as I’d hoped. The highly anticipated balcony was glorious, providing shaded seating and an amazing wide view of the passing scenery and the sea sloshing below. 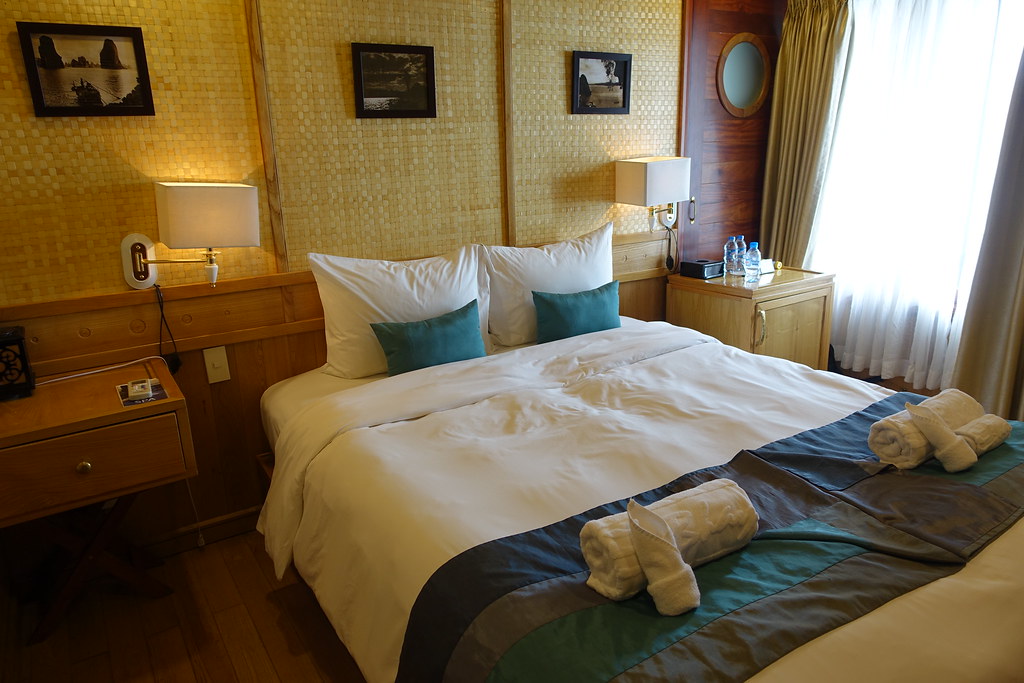 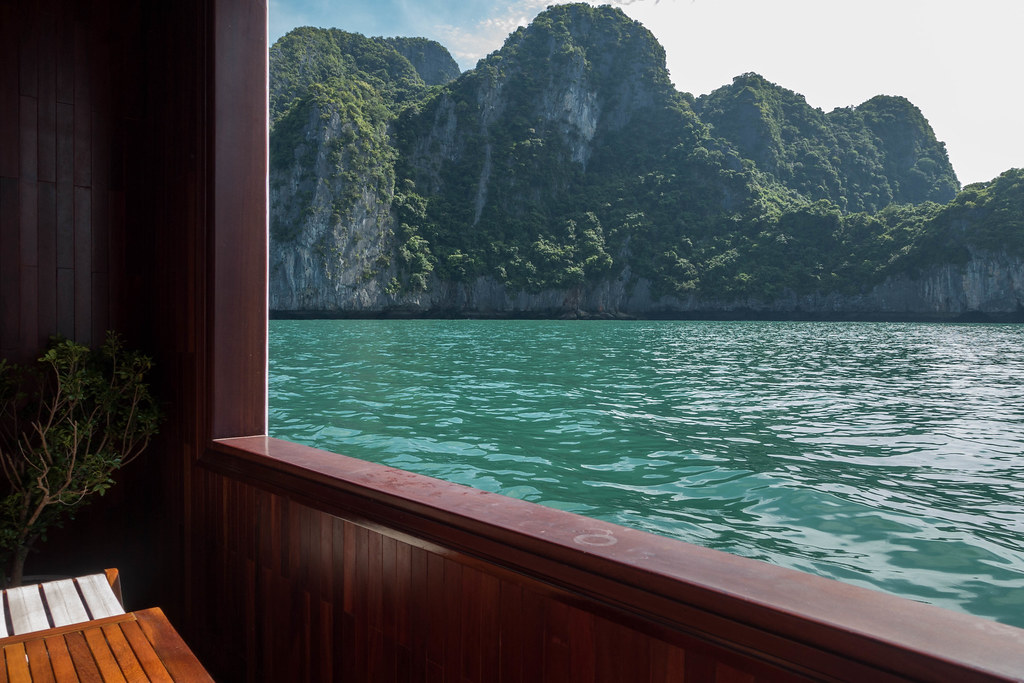 As well as being luxurious, the balcony proved indispensable for drying wet clothes and swimwear. It also exposed us to recurring sales pitches from a persistent saleswoman in a rowboat – generally involving shouts of “Excuse me ladyyy, would you like to buy some wiiine?” regardless of whether I was on the balcony or not (Steve took the below photo of her). 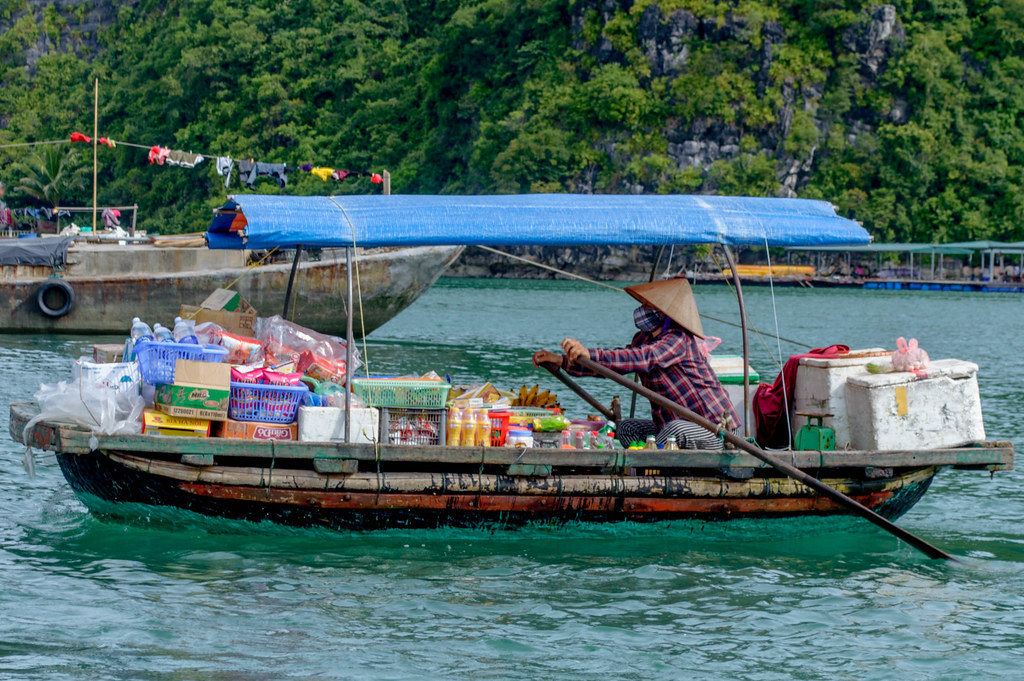 Our first group activity was an extravagant five-course lunch, comprising appetiser, soup, starter, main and dessert. My mouth dropped open when the first thing laid before us was a sundae glass draped with king prawns and surrounded by oysters. This was a thrilling sight for most of our party, but a daunting one for me. I fought past my general dislike of seafood to try a bit of each, but the oysters in particular were a struggle! 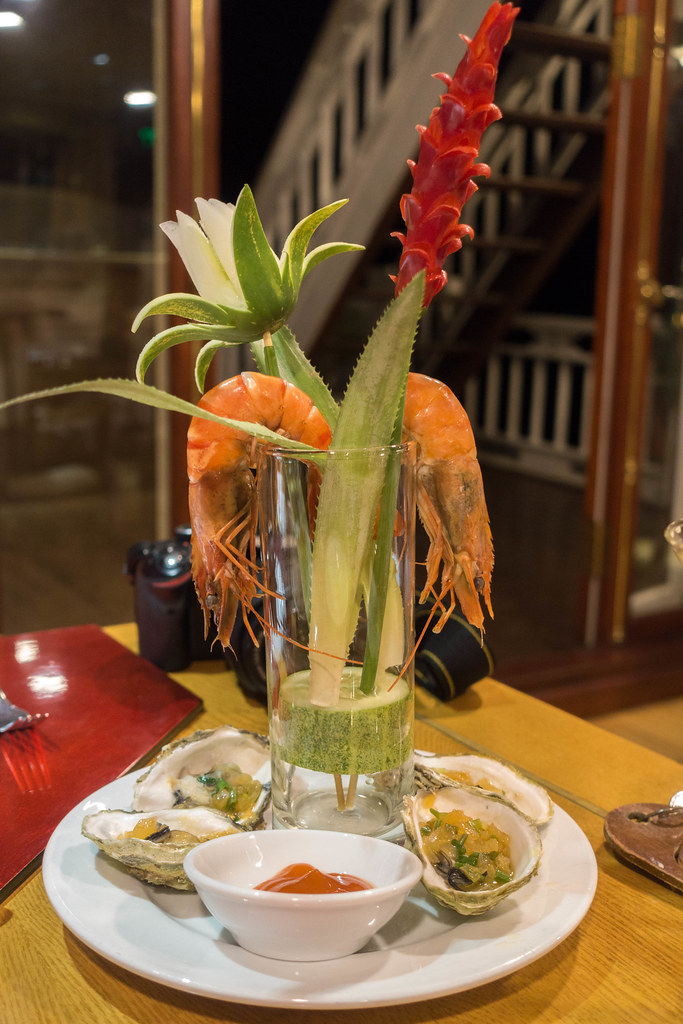 Unfortunately, this was only the tip of the seafood iceberg. Many more sea-dwelling creatures followed, all of them beautifully presented but no more appetising for it. Needless to say, when an innocuous chocolate dessert arrived I devoured it in seconds.

After lunch we strapped on life jackets and bundled into a smaller motorised boat to be taken on our first excursion. We laughed when Mr Linh said we were visiting “Surprise Cave”, but the name was not at all hyperbolic – what lay inside was genuinely astonishing. 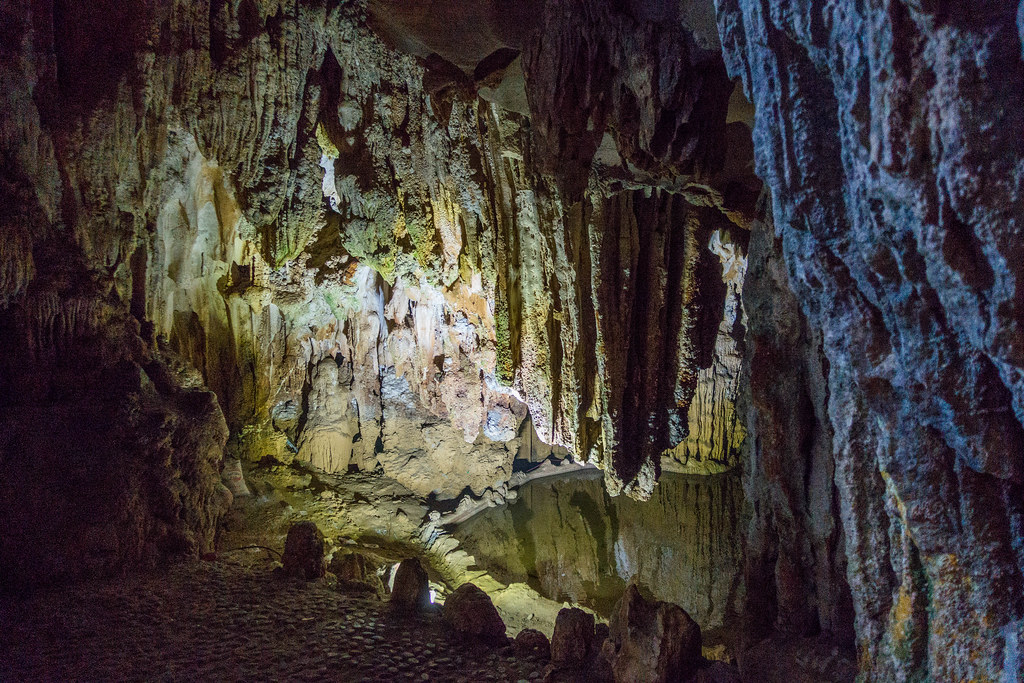 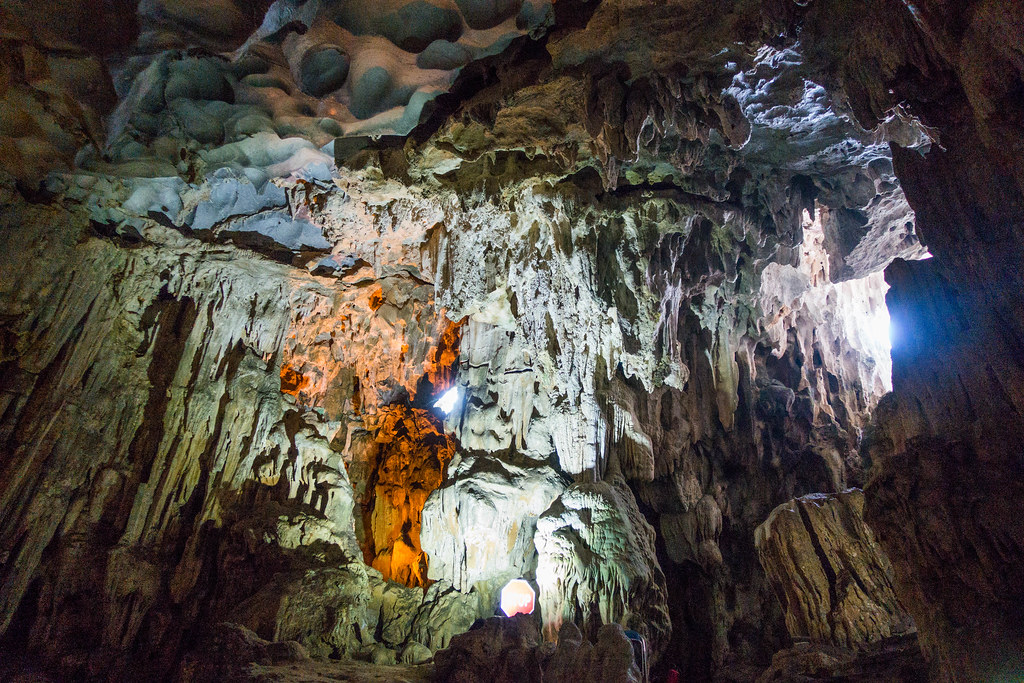 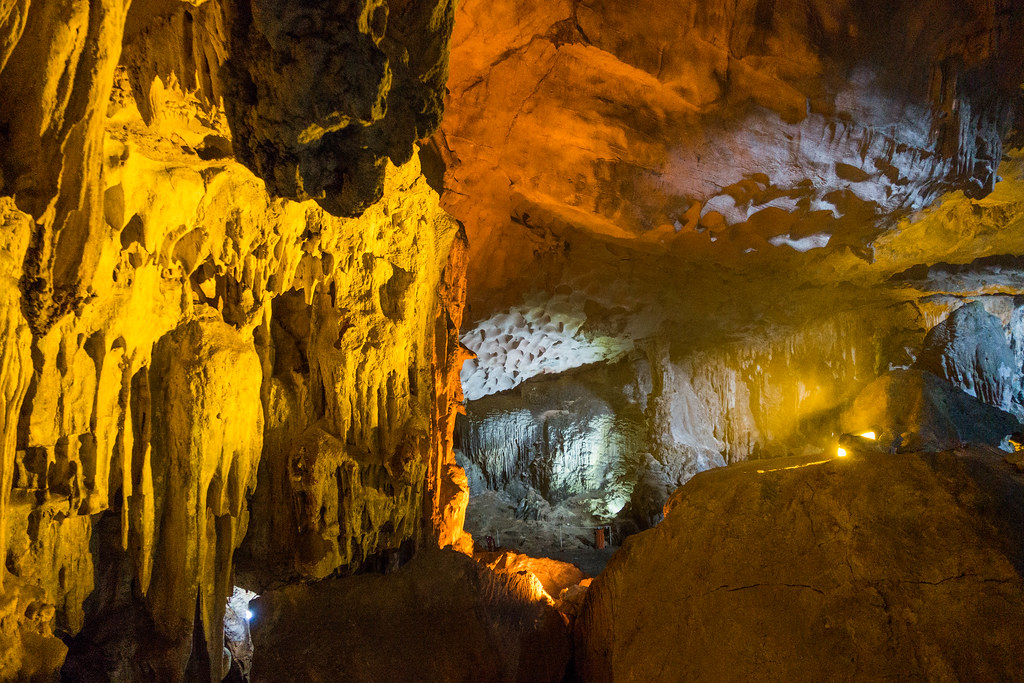 The cave’s amazing geological forms encompassed all manner of shapes and patterns, and were made to look even more spectacular by the coloured spotlights illuminating them. White mist hung at the cave’s entrances, giving the scene an almost mythical atmosphere.

I’ve never been anywhere so closely resembling something from a fairy-tale, or a science-fiction film. Mr Linh’s guided tour of the cave’s interior was disrupted by the other crowds of tourists chasing our tail, but their presence was inevitable given the spectacle on offer. 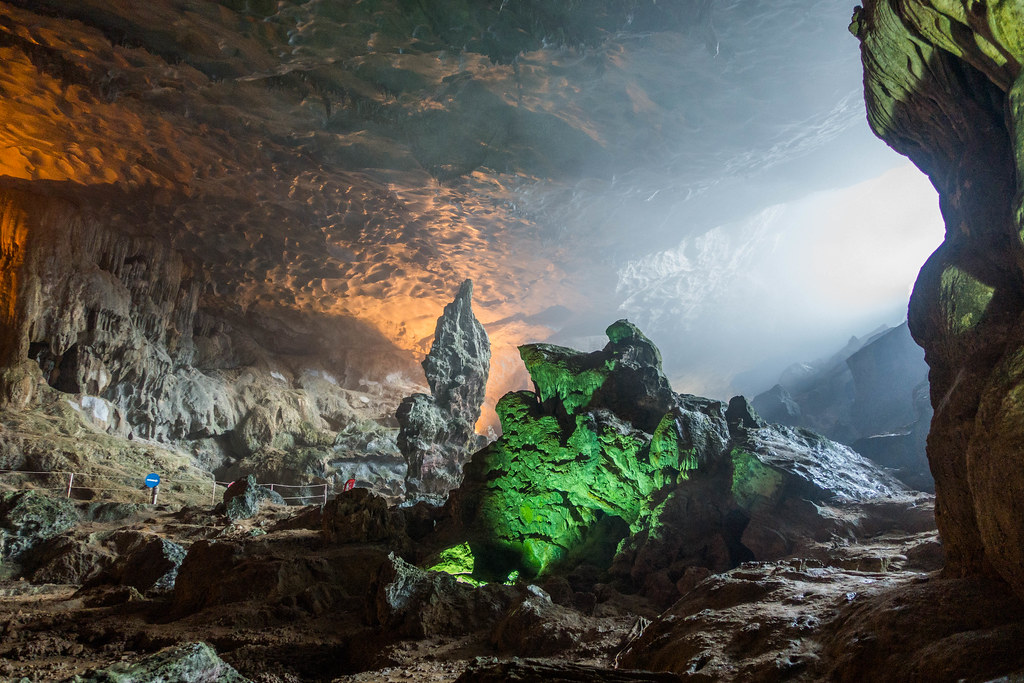 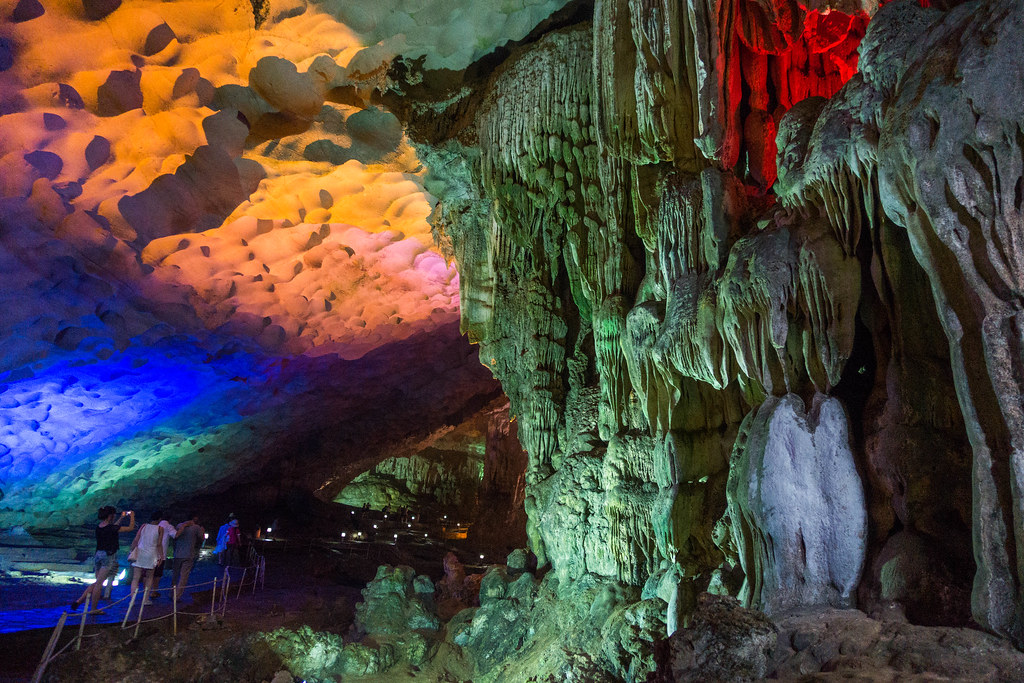 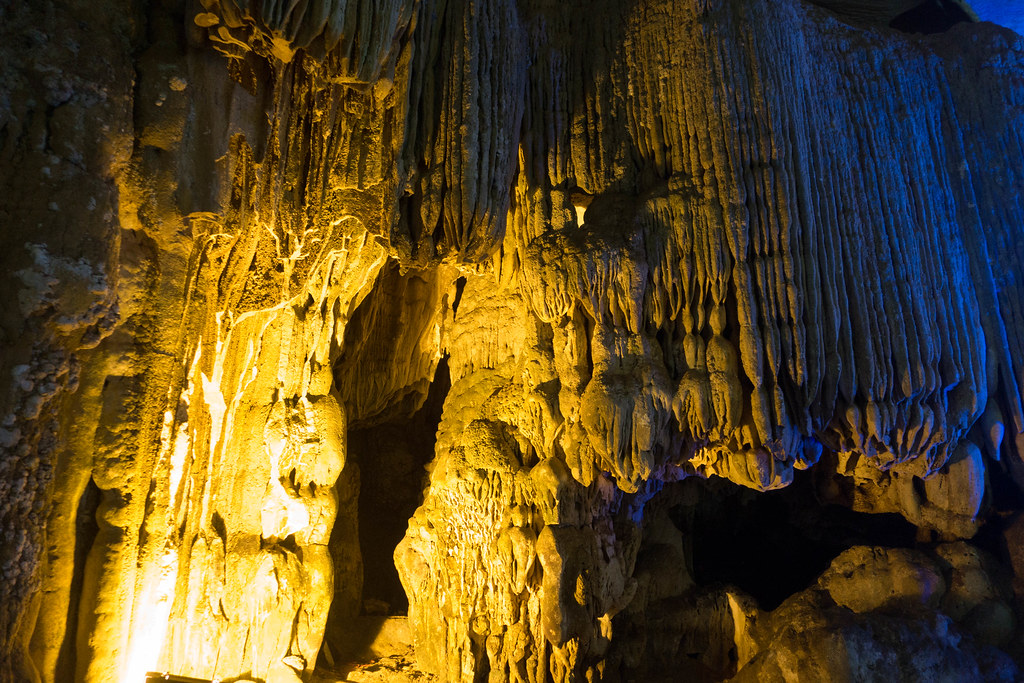 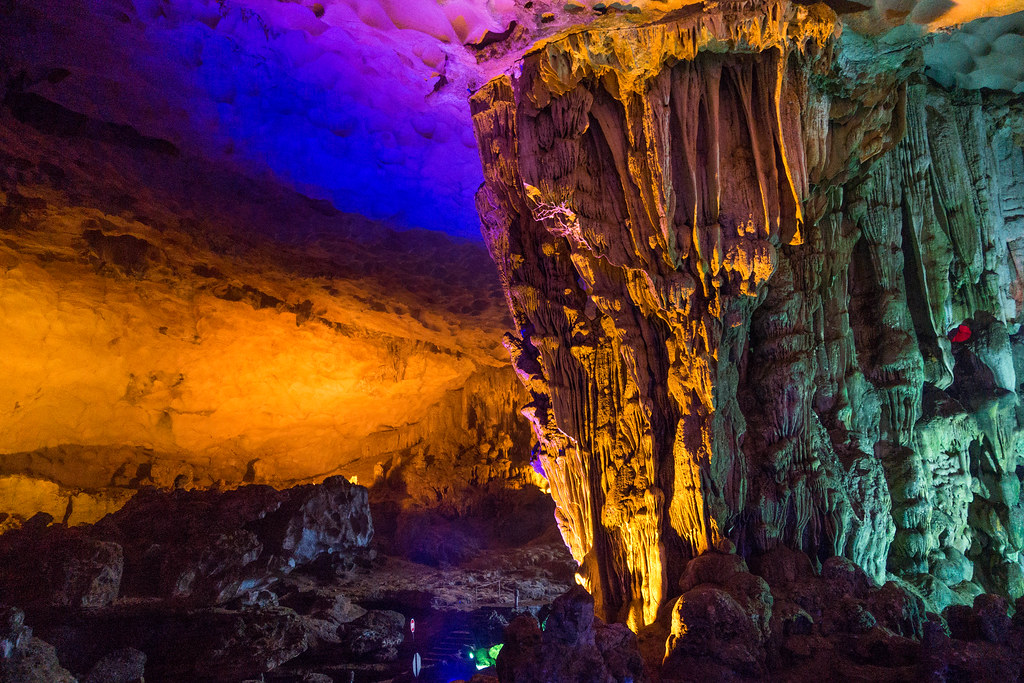 Back on the boat it was straight into ‘Happy Hour,’ with Mr Linh joking (a few too many times) that it was “buy 10 drinks, get 10 free!”. We were also treated to a cooking demonstration by the chef, which took place on the boat’s front deck against a stunning backdrop.

This was so much fun! We volunteered in turn to compete against one another at tasks ranging from shaping Vietnamese spring rolls to cutting carrots into flowers. Mr Linh provided funny commentary throughout. 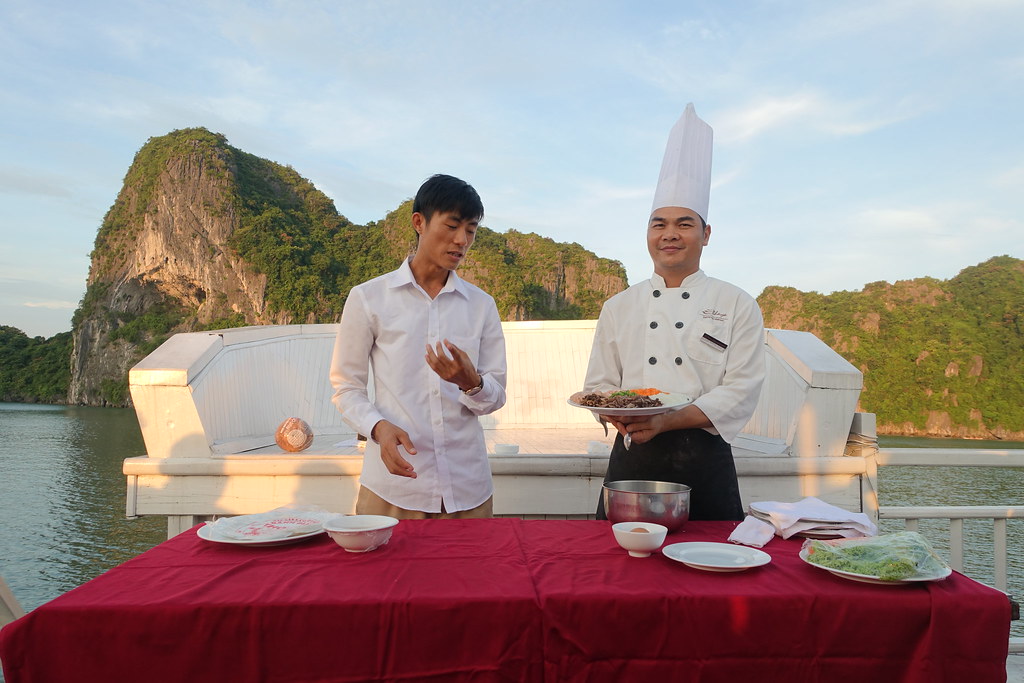 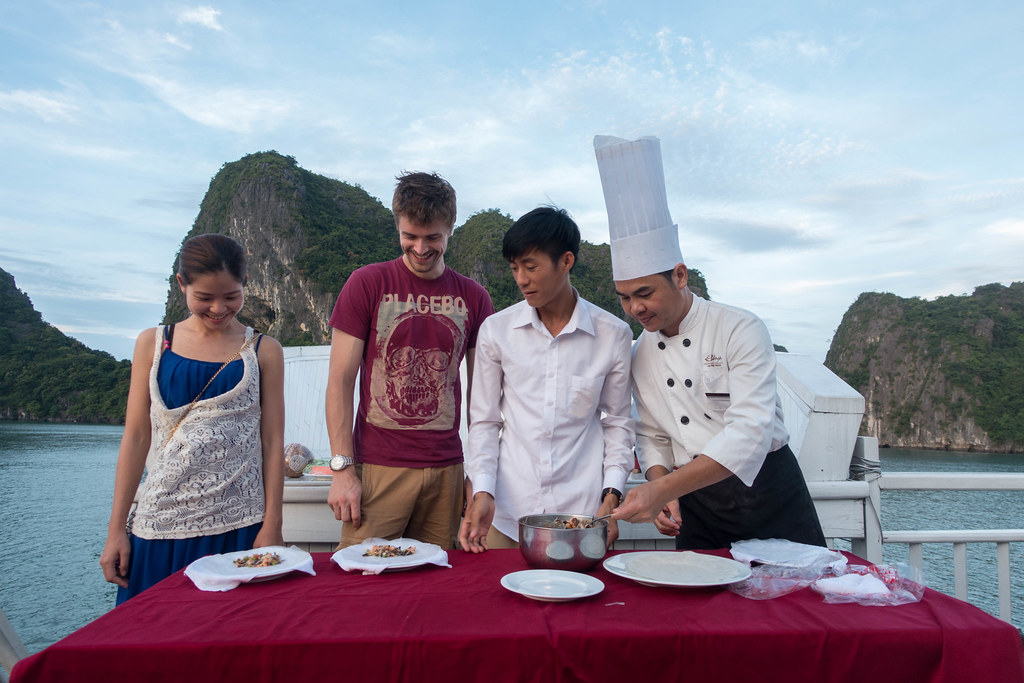 When all the spring rolls had been made and eaten, Mr Linh poured us all some very potent coconut wine. He used this to teach us how to toast like the Vietnamese, which led to us shouting “mot, hi, ba, yooo!” in unison before downing our wine. Despite its potency making most of us grimace and splutter, our glasses were immediately refilled for a second attempt!

All this boozing, followed by another huge five-course dinner, left everyone so full and drowsy that bed was the only option. We needed a good night’s sleep if were to get up at 6.30am for tai-chi and another activity-packed day tomorrow…

All text and photos (c) Juliet Langton, 2016, unless otherwise stated. All rights reserved.